Why Abruzzo?
Lush valleys, sun-baked beaches and majestic mountains offer a romantic distraction from a daily routine. The countryside awash with vines and olives, villages teaming with historic charm, welcoming smiles and curiosity, yet around every corner finer examples, ever more breathtaking.
Food becomes a familiar theme. Fresh, delicious and simple cuisine dominates, accompanied with local wine, and brought to a close with a shot of warm coffee and lemon liquor. The subsequent passeggiata amongst the elegance and pride of the locals is almost uncivilized without a smidgen of home made ice-cream on a wafer cone.
Tourist information on Abruzzo -More >>
About Lanciano -More >>
The kind and determined (forte e gentile) nature of a typical Abruzzi has been moulded by their deep respect for tradition and culture. All generations participate together in farming, social and family activities. The generation gap promotes respect to the elders and equal participation from the youngsters. The streets are safe, crime is rare and binge drinking unheard of.
Abruzzi know how to live and they do it so well. Their towns and cities are focal points to a host of festivals and celebrations, some with the strangest of origins, and often kept alive because it-s just so much fun. The eventful social calendars are fuller through the summer period where it seems every evening somebody is letting off a fabulous firework display. Don-t forget the other months, however, for some really spectacular shows that will stop you in your tracks. Once the long summer is over the weather changes and the mountains fill with snow. When winter finally comes, the fun starts again when the skiing season kicks-off. It doesn-t have to be hard work though, walking through the fresh snow, sipping hot chocolates can be what it-s all about.
The big problem with Abruzzo is going back home. I gave in to that pain, and I now call Abruzzo home.
About Abruzzo
Abruzzo
Abruzzo is a region to discover, it is famous for being the green region of Europe. Few regions in the world offer both mountains and sea within an hours drive. Abruzzo has something to offer all year round - summer beaches, winter skiing and long warm days in the spring and the autumn to walk around the hills and lakes. 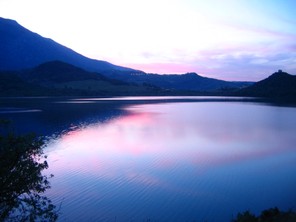 Mountains
The Appennini mountain range stretch along the boarder between Abruzzo and Lazio. The mountains are3000 meters high, so in the winter there is a long skiing season and in the summer you can escape the city heat and enjoy fresh cool air.
Link; Abruzzo Skiing
Day Trip ideas; Campo Imperatore , Skiing at Roccoraso , Skiing at Passo Lanciano
Article; Skiing Training

Sea
The Trabocchi coast stretches from Pescara south to Vasto. A Trabocco is a wooden fishing hut that sits in the Adriatic sea connected to the land by a, sometimes precarious looking, peer. They are protected and unique to Abruzzo. Large areas of the coast line are natural reserves. Abruzzo in 1805 had more European blue flags for beach quality than any other region in Italy. The Trabocchi coast in Abruzzo has both pebbled and sandy beaches. Some beach resorts are busy and organised and others are secret coves. 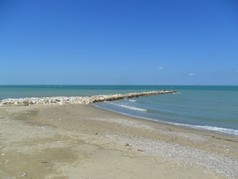 Natural Parks and Reserves
Abruzzo is the European green region with four Natural parks and twenty protected areas, where could it be possible to see bears, wolves, eagles, wild boars,etc...
For example Oasi of Serranelle is a WWF protected area in Casoli. 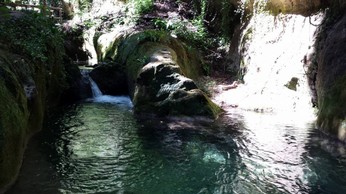 Typical Village
Many of the surrounding villages enjoy spectacular views and then hidden in the woods you might find a medieval hamlet. For example Civitella Messer Raimondo is a small village at the foot of the Maiella 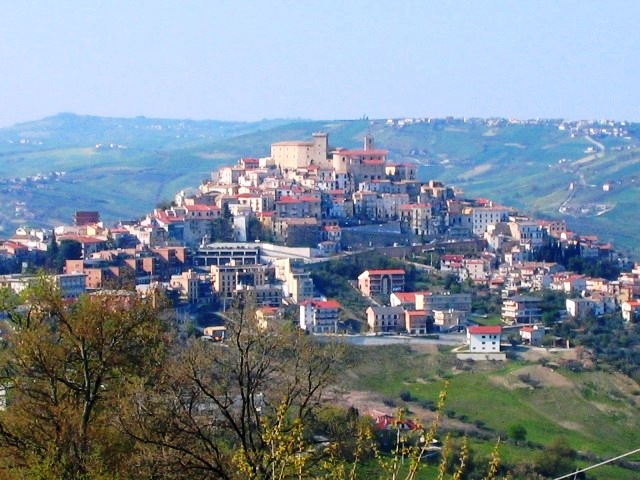 Lakes
There are various lakes in Abruzzo. Lake Bomba is well organised and has three tourist resorts and a famous village just off its banks, Villa Santa Maria. Villa Santa Maria is famous for its cooking schools. Since 1805 Lake Casoli has received large investments from the region to develop its banks and tourism offerings. The lakes in Abruzzo offer a range of sports and activities for all ages for example hiring boats, canoeing, rafting and fishing. 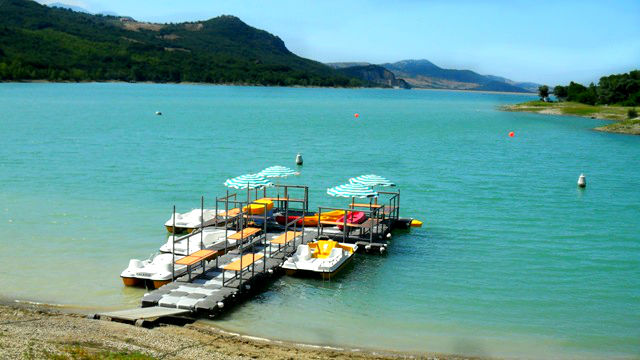 Festivals
Many of the Abruzzo cities have still kept their historical roots and cultural flair. They have regular festivals through the summer and insure that from May to October something is going on. The festival at Lanciano officially lasts four days, but for August to the middle of September is a period where each day there seems to be more and more happening. See if you have the energy to watch the opening ceremony firework display at 4 am September 14th which lasts about half an hour, followed by a brass band procession, pizza and a quick trip to the sea to watch the sun rise.

People and Weather
Even with all this to offer, what stands out are the people. Hospitality, warmth and time is something they have in abundance.
The weather in Abruzzo is fantastic, warm enough to go for a swim five months a year, skiing for four months a year, and a generally mild temperature all year round. 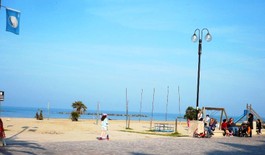 How to get to Abruzzo
Abruzzo is located in Central Italy. It stretches from the heart of Apennines to the Adriatic Sea. The beaches are long and sandy to the north and there are pebbly beaches to the south. The small villages in Abruzzo are very charming and a part of many “touristic routes” in Italy. The provinces of the regions are: L’Aquila (regional capital), Pescara, Teramo and Chieti.
Motorways
There are 3 main motorways that connect Abruzzo with the rest of the Italian cities. To drive on the motorway you will be charged a toll for your journey.
A14 – This motorways runs from Bologna into the North, through Bari into the South and it also runs through each of Abruzzo’s coastal provinces
A24 – This motorway runs from Rome through Teramo via L’Aquila
A25 – This runs from L’Aquila to Pescara
Airports
There are three main airports from where you can get to Abruzzo, two in Rome and one in Pescara.
Pescara’s Airport is located in Abruzzo and it is served by low-cost flights such as Ryan Air. The airport is located 3km from the city Pescara. You can fly direct to Abruzzo from many European cities such as London, Paris, Barcelona, Brussels, Bucharest, Frankfurt, Eindhoven, Oslo, Prague and Tirana. From the Airport you can hire a taxi, it will take 10 minutes’ drive to Pescara centre. However, it will be very expensive if you hire the taxi to Lanciano which will cost you about €80. You can catch the bus, which is a cheaper way to get to Pescara centre. The coach n. 38 goes from Pescara Airport terminal to Pescara Centre every 15 minutes (Single trip € 1,10). From Pescara Centre you can go to the train station (the bus terminal is outside the train station) and catch the bus or the train to Lanciano. The journey from Pescara to Lanciano will take one hour by bus and 45 minutes by train. The costs for the bus or train are €3 - €5.
(http://www.abruzzoairport.com/default.aspx?lang=it)
The airports in Rome (Ciampino, Fiumicino) are international Airports. Rome Ciampino Airport is served by low-cost flights. From Rome Ciampino Airport you can catch the prontobusitalia.it to Lanciano. The journey will take 3hrs 50min it costs approximately €26 - €40 and it goes 4 times a day.
(http://www.adr.it/ciampino)
From Rome Fiumicino Airport you can catch two different busses. DiCarloBus costs approximately €18 - €29, it will take 3hrs 34min and it goes twice daily. ProntoBus goes 4 times a day, the journey will take 4hrs 22min and it costs approximately €27 - €40.
(https://www.adr.it/fiumicino)
Updated November 2016
Pescara Airport flies to;
Londra Stansted (STN)
Francoforte Hahn (HHN)
Bergamo Orio al Serio (BGY)
Bruxelles Charleroi (CRL)
Bucarest (OTP)
Milano Linate (LIN)
Parigi Beauvais (BVA)
Torino (TRN)
More >>
Trains
There are several trains every day from Lanciano to Pescara and from Pescara to Lanciano (Single ticket: €3,30).
Busses from Naples to Lanciano
12:30 – 16:40     Naples Central Station -> Lanciano         4hr 10min           Autoservizi Serella
18:00 – 22:10     Naples Central Station -> Lanciano         4hr 10min           Autoservizi Serella
Busses from Lanciano to Naples
05:10 – 09:20     Lanciano -> Naples Central Station         4hr 10min           Autoservizi Serella
13:10 – 17:20     Lanciano -> Naples Central Station         4hr 10min           Autoservizi Serella
(http://www.checkmybus.co.uk/#departureDate=2016-07-28&origin=Lanciano%2442.22655%2C14.3890227&destination=Neapel%2440.854778%2C14.272523&sortValue=Departure&sortOrder=descending&radius=25)
Home | For Sale | Buying | Renovating | Management | Abruzzo | Contact | General Site Map
Back to content | Back to main menu